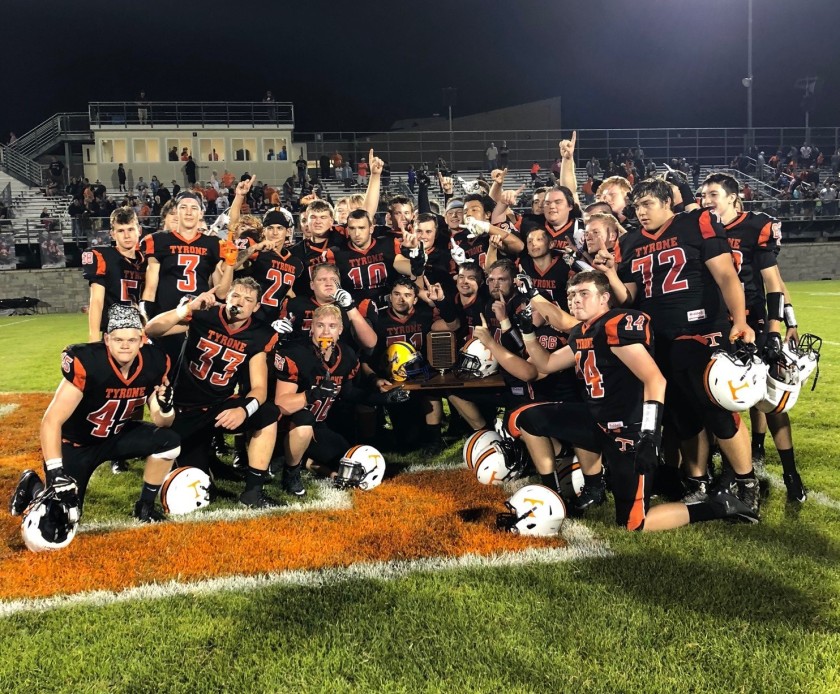 Tyrone coach Jason Wilson was forced to make some bold decisions in the past 10 months, the product of serious introspection.

It’s what you might expect from a coach coming off a second straight sub-.500 season, something unheard of in Tyrone.

It started last January when he stepped in and said he would be calling the shots on offense. It continued in camp when he moved Denver Light back to his quarterback position.

But you really saw it last night in the fourth quarter of the annual Backyard Brawl against Bellwood-Antis. When the fifth-year coach got the chance to put the game away, he wasn’t thinking about milking the clock and hoping for the kind of last-second defensive stand his teams made at home in 2014 and 2016.

Up 13-7 with 3:49 to play, the Eagles could have easily done that. Sitting at the B-A 49 following a punt, the numbers might have indicated three running plays were in order, followed by a deep punt. Had Wilson done that, it would have created a textbook endgame strategy that just might have worked. Maybe.

But this was a different Jason Wilson, and he was going for the jugular.

On first down Light dropped back and found tight end Cory Lehman all alone behind B-A’s defense, and he put the ball on the tape like a Sidney Crosby pass from the dot. Lehman hauled it in and rambled 44 yards to the 6.

Five plays later, in another bold call, junior Keegan Raabe, kicking in his first football game, sliced the uprights with a 20-yard field goal that put the lid on a 16-7 victory at Gray-Veterans Memorial Field.

It was another situation where few could have argued with simply running up the middle to protect a lead, but this was a game Wilson coached to win, and the result was the Backyard Brawl trophy returning to Tyrone after a one-year hiatus.

“We were going to run the ball,” Wilson said of his decision to throw it up to Lehman. “Then it was like, no, we’re going to keep taking our shots here and take a chance. We kind of had the momentum at that point, too, so it was just one of those opportunities where we were going to take our shot and see if we could get it, and we were successful. It was something we saw earlier in the game, in the first quarter actually, so we came back to it at that point because we thought we might get it again.”

Both calls were brassy, and they showed a different side to the typically analytical Wilson, who understands and plays odds like a poker champion.

They capped a game that took on the complexion of most Brawls in the Wilson Era – tightly contested and down-to-the-wire. In fact, in his five seasons only one contest with B-A has been settled by more than nine points.

“Getting the win is just a big momentum shift to set the season in the right direction,” Wilson said.

For Bellwood-Antis coach Nick Lovrich, in his first Brawl as a head coach after nearly 25 as a player and an assistant, the final 10 minutes of the game came down to the kind of miscues not uncommon in the Brawl, a game in which emotion often hinges on which team will blink first.

“That’s going to happen,” said Lovrich. “You have so much emotion, so much adrenalin going in this game, and it’s tough to be able to focus on every single thing. You can’t pinpoint one play out of a whole game saying this is it. I was proud our kids never gave up. Right to the end, they were playing as hard as they can. That’s a sign of a team that’s going to be able to overcome some adversity, and that’s what we’re hoping for.”

Until Raabe’s dramatic kick, the game played out similarly to last year’s Brawl, which was tied most of the second half and wasn’t settled until overtime.

But there were two differences that helped account for the different outcome. First, Tyrone’s offense was able to move the ball with much more consistency than it was able to do in Week 1 in 2017. Five of the Eagles’ nine possessions went at least as far as the Devils’ 35, and three of their four first-half series lasted at least eight plays.

Second was the ability of Tyrone’s defense to contain B-A quarterback Shawn Wolfe, who had a coming out party a year ago, passing for more than 100 yards, rushing for more than 90, and scoring the game-winning touchdown.

Last night the Eagles sacked Wolfe four times and kept him contained to the inside. He completed 4 of 10 passes for 53 yards and was limited to a net minus-3 yards rushing.

“He still got around us a couple of times and made some plays early on, especially in their option,” Wilson said. “We kind of prepared for it a little bit this year, whereas last year we didn’t know what to expect. He broke a couple (last year), and we weren’t really good at tackling at that point. We’ve worked a lot more and switched up some tackling drills, just to work on things like that. We knew going into it that our object was to contain the quarterback, and if you wanted to win this game you were going to have to.”

A quarterback like Wolfe can be contained for only so long, so it was little surprise that he played a big part in engineering the Devils’ first score. Backed to their own 20 in the second quarter following a Tyrone punt, B-A went deep on first down, with Wolfe connecting with Andrew Hale for 42 yards down to the Tyrone 38.

The Eagles were flagged for a personal foul on the next play, taking the ball to the 22, and Troy Walker followed that up with a 19-yard blast up the middle to the 3. Nick Plank scored on the ensuing play, and Alex Schmoke’s PAT made it 7-0 with 4:44 left in the half.

Tyrone responded by finishing off one of its long first-half drives. The big play came on third-and-2 when Light hit sophomore Damon Gripp in the flat, and Gripp was able to juke his way for 35 yards to the B-A 30. The Eagles were forced to overcome two procedure penalties on the series, the second of which set Tyrone back to the 19 on second down. Light then found Zac Albright for 12 yards and a first down, and on the next play Albright, who finished with 95 yards on the ground, went seven yards off tackle for a touchdown. Raabe’s extra-point tied it with 49.7 seconds left in the half.

The game would stay tied into the fourth quarter as both defenses dug in until Lehman got free for the first of two tide-changing plays. From the end of the third into the fourth the Devils had driven from their own 25 to the Tyrone 24, pounding the Eagles on the ground with steady doses of Walker and John Kost. After a procedure penalty put B-A behind the chains on second down, Wolfe dropped back and rolled right but was chased down by Lehman from the edge. Lehman got the sack-fumble, and Braeden Nevling-Ray was there to scoop up the loose change.

Tyrone took over at its own 35, and on its first play following the exchange Light hit Brandon Homan for 47 yards to the 18. Light threw a fade to the corner on the next play, and Gripp came up with a diving grab over B-A’s outstretched defender for the go-ahead score with 9:11 left.

“On a lot of those passes we were right there. We just need to finish the play,” said Lovrich. “That’s part of it. You have to play the entire play. We start off, and we’re in pretty good coverage, and then just a little break down, in a passing situation, two feet makes a big difference. We’re close. Instead of them making the play, we were close to where we could have been making the play.”

The Devils got two more cracks at tying or taking the lead. On the first they were stopped on fourth-and-2 at their own 48 with 6:40 to play, and on the second, after a 34-yard punt by Arik Reader had backed them to their own 16, they were forced to punt with under four minutes to play after managing just two yards in three plays.

Those were some of the situations Lovirch was referring to when assessing that Tyrone made just a few more plays than the Devils.

“We took some positive steps,” Lovrich said. “Defensively, at points, I think we played pretty well, and offensively, at points, we played well. We’re going to have to get more consistent. I told the guys we win as a team, and we lose as a team. We have to bring each other up and assess ourselves. Did we hit all of our goals? Did we do all of those things we talked about during the week? That’s a part of it. We have top find out what we’re going to be good at.”

For Wilson, the key was Tyrone’s defense keeping the play in front of it and making B-A grind out drives.

“If you want to win, you definitely have to eliminate the big plays, and we forced them to drive the field,” he said. “We didn’t give up many deep passes, we didn’t give up any long runs. Eliminate the big plays, and you’re going to put yourself in a good position to win the game. It’s a bend-don’t-break situation, and I thought out front guys did that for the most part.”