The past two Octobers have not been pleasant times for the Tyrone Golden Eagles.

In 2016 they faltered down the stretch after a 3-1 start and stumbled into the playoffs at 5-5. Last season they got out of the gate 0-3 and never found a rhythm, needing an October win over Penns Valley just to qualify for the postseason.

Part of the issue has always been the top-heavy nature of Tyrone’s schedule. For more than 30 years the Eagles have followed up the Backyard Brawl against Bellwood-Antis with a Week 2 game against a top-tier conference opponent. For a long time that was Huntingdon; more recently it has been Central, but the point is the same: you almost have to have at least a split in the first two weeks to avoid playing catch-up for the rest of the season. Conversely, the Eagles can reap the benefits of a 2-0 start for weeks, even months.

By opening 2018 with a 16-7 win over B-A, and then following it up with an eye-opening 33-13 win over Central last week in Roaring Spring, Tyrone has done just that. The Eagles are alone atop the District 6 3A standings as one of just three unbeaten teams in the classification. (At No. 2 sit John Franco and his Penn Cambria Panthers.) 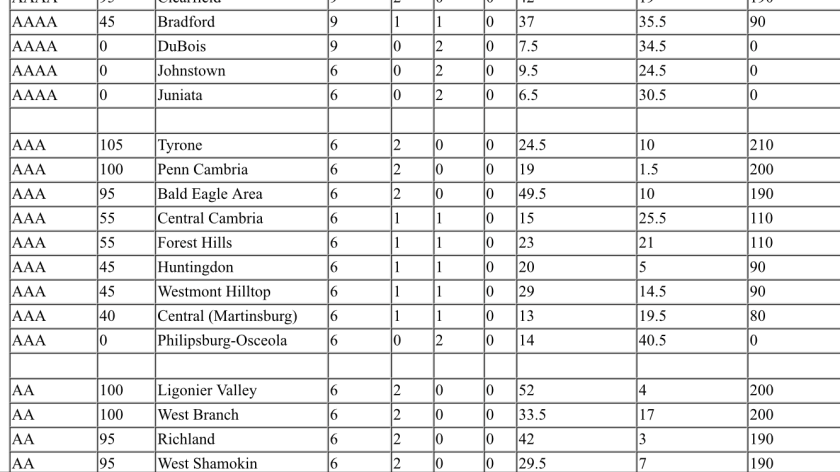 Tyrone has the opportunity to add some distance between itself and the pack Friday at Gray-Veterans Memorial Field when it hosts 1-1 Bishop Carroll in its first pairing with the program whose rise to prominence mirrored its own in the 1990s.

Carroll became a 1A power on the District level at around time the Golden Eagles were making their first forays into the regional playoffs. The Huskies won District championships in 1998, 1999, 2001, 2002, 2003, 2005 and 2010. But the schools have never faced off in a football game until now, and part of that has to do with Carroll’s rapid decline since its last title.

In 2017 the Laurel Highlands Conference voted to drop the Huskies from the conference for football because of the team’s futility – it had dropped 25 straight games midway through last season – leaving the future of Carroll’s program in doubt. The Mountain League voted to pick up the Huskies as an affiliated team, and they will play a Mountain League schedule for the next two seasons (though not a full-fledged ML member).

The helping hand from the Mountain League was just what Carroll needed.

The Week 3 game with the Huskies may be just what Tyrone needs to keep the ball rolling on its best start since 2014. While Carroll is markedly better than it was during its losing streak, it’s a team that provides matchups the Golden Eagles have to like.

Still, Tyrone coach Jason Wilson would like to see his team achieve consistency on offense, as opposed to relying on splash plays, which is why if he had to take one offensive performance over another – either the effort that put of 16 against B-A or the one that dropped 33 on Central – he would take the former.

“We made a lot of big plays against Central, but we didn’t really execute as well as we did against Bellwood,” he said. “That sounds weird to say because we scored more points, but I didn’t think we executed as well on first and third downs. Against Bellwood we moved the ball up and down the field pretty consistently.”

Tyrone has played some offensively talented teams over the first two weeks. Bellwood came into the season expecting to be able to pass and run behind quarterback Shawn Wolfe, but that never happened against the Eagles, who limited B-A to 48 rushing yards. Central quarterback Noah Muthler threw for 197 yards last week, but none of his completions were behind the defense, and Damon Gripp picked him off four times. On top of that, the Dragons ran for only 52 yards.

The addition of Gripp and Brandon Homan in the secondary has given Tyrone’s defense pieces it was lacking last season.

“We saw in 7-on-7s in the summer that we would be pretty strong in the secondary,” said Wilson. “We even have some depth there. We feel pretty comfortable putting our second grouping in during game situations. It’s a group of guys that isn’t afraid to make a big hit or make plays. There are six or seven guys with that mentality in our secondary.”

Add that to the seven guys in front of them who were expected to be the team’s strength and you see an emerging defense that could be pretty solid, so the challenge of slowing a run-heavy team is a good one. Linebackers Denver Light (20 tackles) and Noah Zimmerman (10 tackles, fumble recovery), have been run stoppers through two games, while lineman like Isaac Jackson (2 TFL), Kyle Silva (2 TFL) and Braeden Nevling-Ray (1.5 TFL) have dominated the line of scrimmage and disrupted plays before they could take shape.

They will have their hands full against Vacco, Jarrett Grove (169 yards) and Trevor Hogue (137 yards), but they will also have the benefit of added run support from the secondary.

“Their strength is their quarterback and their running game,” said Wilson. “They’re another option team. They’re very good with the run, and the key is definitely to stop their running attack. We want to keep the play in front of us and not allow any big plays.”

Granted, there are schools that may reach a District final once in school history and it would be a celebration lauded in yearbooks for a century, but those aren’t the expectations at Tyrone. This senior class recognizes that and embraces it.

“We are working our hardest to have a shot at going to Mansion Park,”
Lehman said. “We’re always saying how awesome it would be to practice on
Thanksgiving. This senior class is going to lead this team as well as we can
to put Tyrone football back on the map.”