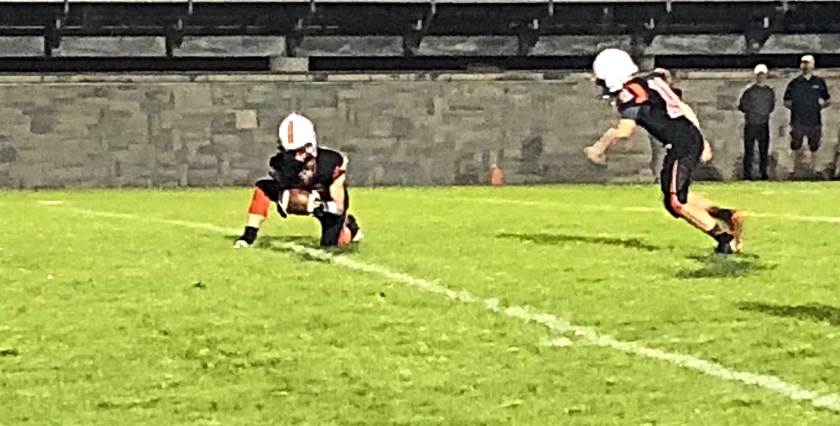 For all of the problems the Tyrone football team might have had last year, generating turnovers wasn’t one of them. In 11 games the Golden Eagles defense produced 23 takeaways, which makes you wonder how they were able to simultaneously allow 327 total yards per game.

One thing Tyrone didn’t do was distribute immediate punishment on the heels of turnovers. Tyrone scored only 27 touchdowns all season in 2017, and with a defense that hemorrhaged  points their takeaways were generally just patches to stop the bleeding.

The Golden Eagles have registered nine takeaways so far this season, so they’re on pace to outdo their numbers from last season and surpass 30. Moreover, they’ve taken five of those turnovers and flipped them into points.

Friday against Bishop Carroll was just the latest example when, after Arik Reader recovered a fumble on the first play of the second half, quarterback Denver Light hit Brandon Homan with a 32-yard bomb one play later.

“Anytime you turn the ball over, when you have some momentum going in and you get the ball back, we have plans, and it definitely deflates you,” said Huskies coach Sean Billings. “It takes the wind out of your sales. I think that was a big point. After that it was a little tough to bounce back, and you could see the wind come out of our sales on the sidelines.”

The Golden Eagles have scored at least one touchdown off a turnover in each of their games. Against Bellwood-Antis in Week 1, Reader’s fumble recovery to cap Cory Lehman’s sack of Shawn Wolfe led to an 18-yard touchdown reception by Damon Gripp that gave Tyrone the lead.

Last week at Central, the Golden Eagles forced six turnovers and turned three of them into points.

Tyrone’s go-for-the-throat mentality following takeaways has allowed the Eagles to build on momentum, which is what Wilson liked about the immediate score against Carroll, which was trailing by just 10 at halftime.

“We just took our shot coming right back out after it,” said Wilson. “They played tough in the first half. Give them credit. Getting a turnover right off the bat was just huge momentum. It gave us field position probably inside our 30. That’s a big momentum swing to start the second half.”

If scoring off turnovers is one switch for Tyrone that has helped flip things around from last season, another has come in the area of personnel.

The Golden Eagles entered the season with a strong senior class that was a known commodity. Players like Light, Lehman, and Zac Albright gave them quality experience at several skill positions. The return of linemen like Isaac Jackson, Braeden Nevling-Ray, Connor Wertz, and Carter Maceno meant they had a foundation on both sides of the ball on the line of scrimmage.

But the addition of five players who weren’t a part of the varsity picture in 2017 has made a big difference, as well.

The weakness of the Golden Eagles’ secondary last season was no secret. Tyrone allowed almost 160 yards per game through the air and was abused weekly, but that isn’t happening this year, and the reason is because Damon Gripp, Brandon Homan, and Tommy Hicks have seamlessly stepped into starting roles and made Tyrone’s secondary better. Gripp had four interceptions against Central (he barely missed a pick-6 against Carroll), Homan has the closing speed to take chances in coverage, and Hicks has been a quarterback of the defense at his safety position.

On the other side of the Ball, the trio has accounted for all seven of the team’s touchdown receptions.

Sophomore Kyle Silva has strengthened the defensive line, recording four tackles for loss in just two games (he missed Week 2 with an illness).

Add to that junior Keegan Raabe, a soccer player who had never played football until this season. He’s got two field goals and nine PAT kicks, and his kickoffs are setting teams back inside the 10 to receive as his range improves each week.

They may be just five players on a roster of 42, but their impact has been immediate for the Golden Eagles.

Raabe nearly added another highlight to his modest football resume against Bishop Carroll. Late in the fourth quarter, after Brandon Lucas had turned in video game-like 65 yard touchdown run, the Eagles lined up for what should have been Raabe’s sixth extra point.

Something went wrong with the snap, and it put the undersized junior in a position he likely never imagined when he decided to kick for the football team.

Homan was down to take the snap and set the ball, but it went over his head and into the hands of Raabe. Initially he froze, but he quickly snapped to it and ran to his left. After one sharp cut set him moving upfield, it looked for a split second like he might be able to run it in for a two-point conversion.

That is, until Patrick McAndrew appeared out of nowhere to blast Raabe with a jarring hit that pancaked him to the ground. Raabe got up quickly, but then stumbled with a noticeable limp. He was helped off the field by his teammates.

Afterwards, Wilson chuckled when thinking about the play, mostly because Raabe was fine and not seriously hurt, but also because the kicker is so new to the game he had never had a chance to work on a such a scenario in practice.

“I guess we never really talked about what to do if the snap goes to him,” Wilson said with a laugh. “So we had that conversation. We told him if the snap goes to you either take a knee or throw it, because if the other team gets it the play is dead, so throw it up and take you chance, but don’t hang onto the ball. ”

Wilson thought Raabe might have a chance once he squared himself towards the goal line.

“He broke around the edge and I thought, OK, what’s going to happen here,” said Wilson. “Then, yeah, it didn’t work out so well.”

Similar to Tommy Stevens, the talented multi-purpose quarterback waiting his turn at Penn State behind Trace McSorley, Tyrone sophomore Brandon Lucas is forcing his coaches to look for ways to get him on the field.

“Brandon is a really good runner, and we’ve debated how to get him on the field to use him and get him to make an impact,” Wilson said. “We’re not afraid to put him in and run him. He’s got some moves and speed, and he’s a hard-nosed runner.”

Lucas, who lettered on the varsity basketball team as a freshman, said he’s just going out there and having fun.

“It’s a great feeling,” he said. “We’re all hard workers and we’ve been trying to accomplish our goals for a long time, so we’re glad we’re finally doing it.”