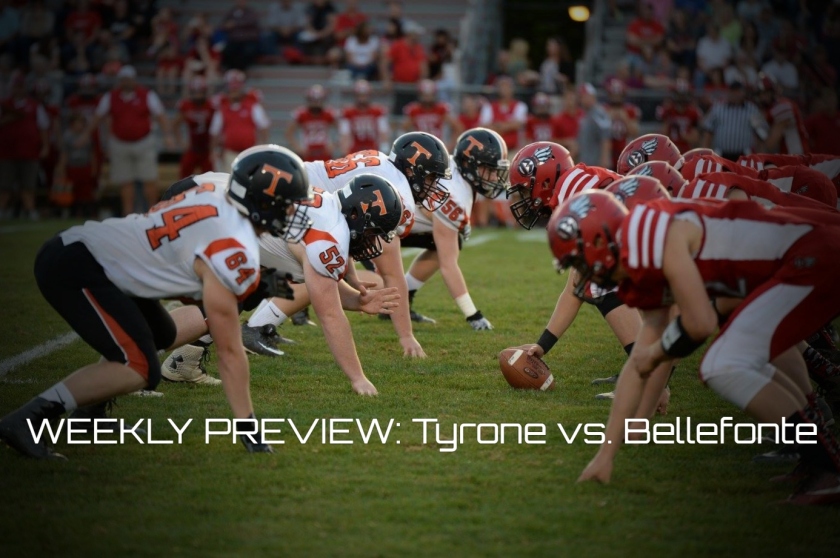 If you want to know where things began to change for the Tyrone football program – when losses began to stack higher than wins, when the wrong thing happened far more often than not, when the veil of invincibility that had enshrouded the program for two decades began to slowly drop – look no further than September 23, 2016.

The Golden Eagles were playing Bellefonte at Gray-Veterans Memorial Field, and the odds were against them from the start.

Denver Light, the team’s starting quarterback then and now, was injured and on the sidelines. Star running back Gary Weaver was out for the season from an injury suffered two weeks earlier. Starting lineman Stevie Colyer was done for the season by Week 2.

Tyrone was depleted, but its game against the Red Raiders was just the kind of game the Eagles had found ways to win time after time over the years – sometimes with guts, sometimes with role players stepping up, sometimes with smoke and mirrors.

So when the Golden Eagles took a 14-0 lead in the third quarter, the arc of the game fell neatly in line with the narrative Tyrone football players are raised to believe – we don’t drop games to teams like Bellefonte, especially not at home.

Things changed dramatically after Tyrone’s second score, for that individual game, and for the program in general, and tomorrow night the Eagles will have come full circle, finding themselves again facing the Red Raiders, but this time with a chance to reverse the trajectories of the two programs.

Tyrone (4-0) will take on Bellefonte (4-0) at Alumni Stadium in Wingate in a Mountain League clash with implications that could well extend beyond league or District standings.

“I’ve thought about this a little bit,” said Tyrone coach Jason Wilson. “Everything kind of flipped for both programs after that game (in 2016). After we went up 13-0, they fumbled the kick, and we had a chance to score again right away. If we punch that one in, the game is basically over. Obviously, they’re still pretty good, and we’re good now, too, so this should be a pretty good game.”

Wilson was talking about a key exchange when Ellisha Shakeem Lipscomb fumbled a kick following a touchdown run by Brandon Loose. Tyrone took over at the 42, just as its running game was beginning to gain some steam, but Loose fumbled a handoff, which was recovered by Garrett Kutches, and returned 45 yards for a touchdown.

That made it 13-7, but while Tyrone still held the lead, the momentum completely changed, and with Light out of the lineup it gave the Raiders a chance to gang up on the run, which they did. When Chase Gardner connected with Tanner Helms on an 81-yard touchdown pass behind a blown coverage in the fourth quarter, that was it. There was still 11:45 to play, but without a passing threat, the Golden Eagles were headed nowhere fast.

“It was a really hard-fought game,” said Tyrone senior Cory Lehman. “If we could get a win this year, it would be an awesome accomplishment and another step towards our goals.”

They’ll have their chance to atone for the loss tomorrow in the biggest game for the Golden Eagles since 2016.  Wilson believes both teams will have a chance at finding out just how good they really, which is important Tyrone at this juncture of the season. Halfway through, the Golden Eagles are undefeated and leading District 6 2A, but their next three games are against teams with a combined 12-0 record, after which they’ll play 5A Hollidaysburg.

There’s a lot to like about the Tyrone-Bellefonte matchup, and here are a few things to look for.

The Red Raiders have played one team that made a sustained effort to run the football, and that is the team that came closest to beating them. In Week 1, Jersey Shore found some success on the ground, running 28 times for 168 yards in a 17-14 loss.

Since then, Bellefonte hasn’t come across a team that committed itself to running the football for a variety of reasons. The Raiders jumped all over Philipsburg-Osceola and Central Mountain, which certainly changed some game plans, while Huntingdon just found little success and ran only 19 times.

Tyrone is committed to running the ball against the Raiders. Behind leading rusher Zac Albright, who’s got just under 500 yards, the Golden Eagles are averaging more than 180 yards per game on the ground. Wilson likes the way his line is playing, and he likes the way they match up with the Red Raiders.

“Their defensive line is very aggressive,” said Wilson. “We still want to establish the run against them. We think we match up well across the boards. Last week we probably passed a little more than I had wanted to, but like we have always said, if a team is going to stack the box against us we’re going to take our shots.”

Tyrone passed the ball 23 times in a 32-14 victory over Philipsburg-Osceola, with two passes going for interceptions. But the payoff was 187 passing yards and a touchdown through the air. Ultimately, Albright was still able to go over 100 yards and score twice on the ground as the Eagles sustained a balanced attack that has become typical this season.

The Eagles had 31 rushes against the Mounties, and that’s a number that would bode well for them against Bellefonte. If they can stick to the running game long enough, and have enough success with it to generate 25 to 30 carries, the odds shift heavily in their favor.

Coach Shannon Manning has transformed Bellefonte into a physical team through offseason training and sheer force of will, so running the ball is something they like to do. In last year’s 49-14 beatdown of the Golden Eagles they ran for 309 yards.

The Raiders are just as potent on the ground this year, averaging 266 yards per game. Running back CJ Funk averages nearly 10 yards per carry and leads the team with 519 yards, while quarterback Kyle Myers, who averages 100 passing yards per game, has rushed for 244 yards.

Stopping Bellefonte’s offense is as simple as disrupting the flow for one or both of those two, but doing that isn’t quite so simple. The Raiders run an offense that spreads the field and uses a lot of motion to isolate favorable matchups against the defense. It’s tricky to stop, but one way is through pressure upfield, which Wilson thinks his defensive line can generate.

“They do a lot of motion. They’re motioning someone 90 percent of the time,” said Wilson. “They like to get the defense moving and get people looking at the motion and then hit them with something else, so we’ve got to be disciplined with our reads and aiming points.”

Wilson likes the chances of his defensive line, and it stands to reason. The group, led by Braden Nevling-Ray, Aric Reader, and  Isaac Jackson, combined with Cory Lehman and Matt Clifton bringing pressure from the edges, has accounted for 29 tackles for loss and 13 sacks this season. But they’re yet to see a team that can disguise its plans with motion quite like the Raiders.

“They’re still a pretty good offense,” said Wilson. “We’re going to have to stop their quarterback and their running back because it all starts with them.”

Myers has come in and performed well in place of Dylan Deitrich, who graduated last year after rushing for 1,600 yards and passing for 1,200. He the focal point of the Raiders’ offense, and he’s been absolutely rock solid, completing 58 percent of his passes without throwing an interception.

Tyrone’s Denver Light is going to have to be better, and he can. After returning to the spot he commanded for a season-and-a-half  this year, Light has thrown for 659 yards and eight touchdowns with only two interceptions, and he’s done so by trusting his receivers and eliminating big losses.

Damon Gripp (12 receptions for 228 yards), Brandon Homan (4 receptions for 133 yards), and Tommy Hicks (10 receptions for 147 yards) have come on to give him speedy weapons who extend the field, while Cory Lehman (9 receptions for 118 yards) has been the steady senior extending possessions. It’s been a solid arsenal, and when all else has failed Light has effectively scrambled out of trouble and into positive-yardage, which is something that was missing last season.

A running attack that works well enough to stick with it, combined with more solid play at quarterback and the occasional shot downfield, is just the recipe Wilson is looking for in a game he said will be determined in part by the team who makes the fewest mistakes.