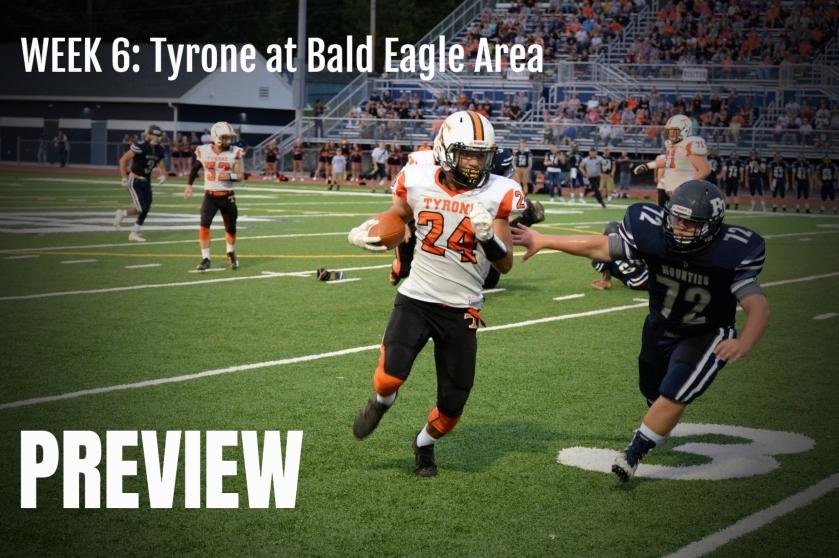 Tyrone was in the middle of a 34-15 pounding of Bald Eagle Area two seasons ago, and yet you could see a season like the one BEA is having now wasn’t that far away.

Here the Golden Eagles were, up three touchdowns, absolutely cruising, and Bald Eagle, led by an impressive group of underclassmen – many of them sophomores and freshmen – kept pushing and pushing and talking and talking.

And now it’s gotten BEA to this point: 5-0 at the season’s midway mark, sitting on top of the Mountain League in a tie with Clearfield and Bellefonte, and leading the District 6 3A playoff standings.

The only thing missing is a win commensurate with the numbers they’ve accumulated so far. While the Eagles are averaging 457 yards and 46 points per game, they’ve only beaten one team with a winning record (3-2 Penns Valley), so they’re looking to legitimize an unblemished first half of the season.

There probably aren’t many teams  they would like to do that against more than Tyrone.

The teams will face off Friday in Wingate at Alumni Stadium, Tyrone’s second trip to BEA in as many weeks after losing to Bellefonte there last week for its first loss of the season.

The Golden Eagles (4-1, 3-1 ML)  have not lost to BEA since 1994, a 6-0 defeat in Tyrone in the first year of the John Franco regime. It’s the longest winning streak Tyrone has going against any of the teams currently on its schedule.

The game will center around a strength-on-strength matchup, with Bald Eagle’s high powered passing attack going head-to-head with the Golden Eagles’ athletic secondary.

So far, Bald Eagle (3-0 ML), behind quarterback Jaden Jones, has had its way with everybody. Jones has thrown for more than 1,400 yards and 17 touchdowns, and he’s run for 193 more.

Gage McLenahan – one of those brash freshmen from 2016 – leads BEA in receiving yards with 378, and he’s second on the team in rushing. Blake Roberts – a sophomore two seasons ago – is the team’s top rusher, and three receivers outside of McLenahan have more than 200 receiving yards.

“They’re a pass-heavy, spread offense that’s significantly different than what we saw with Bellefonte,” said Tyrone coach Jason Wilson. “They rely a lot more on big plays. Their quarterback is elusive, and they have a lot of speed.

“They have an athletic quarterback with a good arm, and his receivers do a good job of getting open when he scrambles. We’ve got to be sure we don’t get caught looking at the quarterback while the receivers get behind us.”

One thing Jones hasn’t seen to this point is a pass rush as good as Tyrone’s, and that’s one of the key areas to watch for Friday.

The Golden Eagles have 38 tackles for loss this season and 16 sacks. Braeden Nevling-Ray leads both categories (13 and 6, respectively), but Tyrone’s pressure has been a group effort, with 14 players getting stops behind the line of scrimmage.

If the Golden Eagles can continue to get a strong push while applying pressure off the edge from players like Nevling-Ray and Cory Lehman, it could prove disruptive even for the athletic Jones. But there is a catch: Wilson said he wants to prevent his team from getting too deep upfield on its pass rush, in that way actually creating space for Jones to maneuver.

“We’ll have to see what our rush is doing,” said Wilson. “We’ll monitor it and see if we want to go with a strong pass rush or try to keep him in the pocket and play coverage.”

Wilson is anticipating seeing seven defenders in the box in an attempt to slow Tyrone’s running game. The reason Bald Eagle can do that is because their defensive backs are athletic enough to play man.

Central used the same strategy and Zac Albright, who has 595 yards on the season, torched the Dragons for 200 yards. The challenge will be the same against BEA.

“We have to see if we can move the ball with our six blockers against their seven defenders,” said Wilson. “If we can, that will be big. We won’t have to rely on the 1-on-1 matchups we have on the outside.”

Tyrone has enjoyed the 1-on-1 matchups it’s gotten through its passing game this season. The Golden Eagles realize when they will get them, seek them out, and then attack them, whether it’s through a strictly man defense or from a zone that shades its coverage to one side or another. As Wilson has said often, the Golden Eagles take their shots when a defense gives them.

It’s one of the reasons quarterback Denver Light (761 yards, 9 TDs) has enjoyed a resurgent season. The senior quarterback recognizes coverage mismatches and throws a deep ball that players like Damon Gripp and Cory Lehman can go get.

Tyrone will see a group this week that has been just as strong in one-on-one matchups from the other side of the ball. BEA’s secondary has eight interceptions and has broken up 23 passes, so getting one by them isn’t going to be easy.

Along with Gripp and Lehman, Tommy Hicks and Brandon Homan have played big roles in the passing game, as has Albright in Tyrone’s screen game. The Eagles will need contributions from all five of those players to find a matchup it likes against Bald Eagle’s formidable secondary.

With so many of the same faces back fro last year’s 3-8 season, it’s only natural to look for something different that has contributed to this year’s 4-1 start.

Gripp, Hicks, and Homan in the secondary may be the biggest factors.

The trio makes plays, they rarely get beat deep, and they communicate like seasoned veterans in orchestrating the Golden Eagles’ zone defense.

Gripp leads the group with five picks, but the speed and football IQ of the entire group has made it a difficult unit to throw against.

Their credentials will be put to the test in a big way against Bald Eagle, which is averaging almost 280 passing yards per game.

“I definitely think it will be a challenge for them,” said Wilson. “I think we match up well. A spreads team like this is something we haven’t faced yet, so it might take them a while to catch up to the speed of things; you just hope they haven’t scored two touchdowns by the team we get used to the speed.”