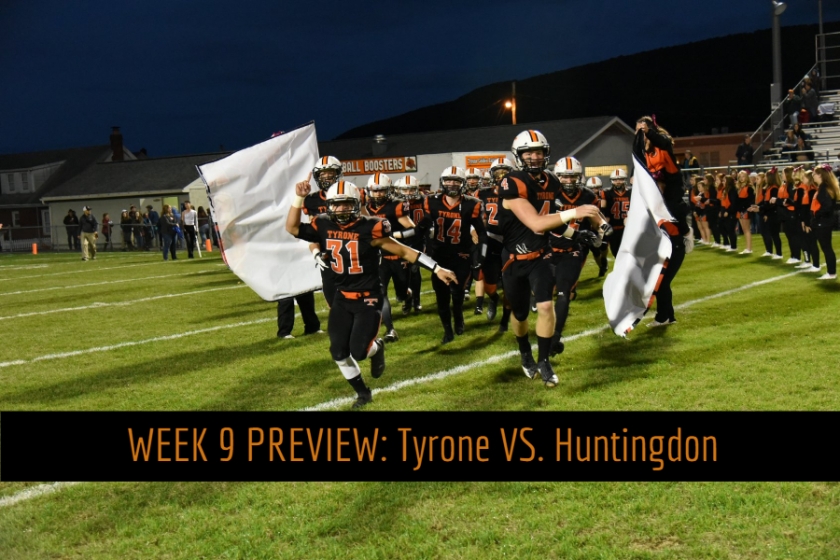 If you want to play the game of who’s had it worse, Huntingdon coach Mike hudy probably has you beat.

It started with a rash of injuries on his line, which is the last thing a team replacing its top skill players needs, but that’s been the least of his concerns.

In September, steady rains completely flooded War Vets Field, and the ‘Cats’ practice field wasn’t much better, turning into a swamp that was all but malarial.

“We had kids getting 70 and 80 mosquito bites a night. One of our players got the West Nile virus,” Hudy said.

Before the cool winds of October took care of the bug problem, the team was practicing in a warehouse owned by one of Hudy’s friends just to have a dry surface free from pestilence. It was an older building with support columns spread across its floor, so players not involved in drills stood in front of them to keep other players from ramming into them and getting injured.

“This might have been the toughest year out of my seven years here, and we were 1-9 my first season,” Hudy said. “We’re 4-5 and battling for a playoff spot, so I’m actually kind of happy with that.”

Hudy and the ‘Cats visit Tyrone on Friday in the regular-season finale, and there’s a lot on the line for a pair of teams one loss away from sub-.500 seasons. A win for the Golden Eagles, who currently hold the fourth and final spot for the District 6 3A playoffs, and they’re all but guaranteed their twenty-fourth consecutive trip to the postseason. A win for the ‘Cats, who are currently sixth, could allow them to leapfrog Tyrone and claim the No. 4 seed.

“It’s a little odd playing this game at the end of the year, but it raises the stakes with the playoffs on the line,” said Tyrone coach Jason Wilson, who throughout his career as a player and a coach for the Golden Eagles has always played Huntingdon within the first three weeks of the season. “It’s Senior Night, so I think our guys know what’s on the line. But we’ve got to just worry about ourselves. We’ve been hurting ourselves lately. We’ve got to play our game and not worry about the situation, and things will take care of themselves.”

Taking care of themselves, Wilson said, means two things: eliminating penalties and finding ways to get points off turnovers. Over the last two weeks, Tyrone has forced nine turnovers and yet scored only one touchdown as a result. Meanwhile, the Eagles have continued to pile up penalty yards, adding to a total that has grown to 522 yards on 60 penalties.

“We’ve led in every game this season except Bald Eagle Area, and the big thing has been penalties and not taking advantage of opportunities,” said Wilson. “When you think of the amount of yards we’ve given up in penalties that don’t even make the stat sheet, it’s something we’ve got to clean up. We’ve moved the ball well since the Bald Eagle game. We’ve got to finish drives and take advantage of big plays. We’ve gotten a lot of turnovers, but we’re not capitalizing.”

It all came to a head last week against Penns Valley, a team experiencing a resurgence at 6-3 and with one of the top offenses in the Mountain League, but one that was undeniably beatable in Week 9. Tyrone had two cracks at game-winning scores inside the 15 in the fourth quarter, and each time the Eagles were stonewalled. They picked off league-leading passer Aaron Tobias twice and got two fumble recoveries in the second half, and yet outside of their first series of the game, which resulted in a touchdown, there wasn’t much going on offensively.

That’s how it’s been for Tyrone for most of its five-game losing streak. After averaging 334 yards and 31 points per game through the first four games, the Eagles have since slipped to 236 yards and 8.2 points per game since.

They’ve shown signs of life at points, with better offensive production in Weeks 8 and 9 than any time since Week 4, but the results have been the same.

It’s been the opposite for Huntingdon, which enters the game having won three of four and scoring more than 50 points in each of its last two games.

It’s no small coincidence that the ‘Cats rise has come at the expense of the same teams Tyrone was handling earlier this season. Huntingdon’s last three wins came against Bishop Carroll, Philipsburg-Osceola, and Central, teams the Eagles likewise dominated in September.

“The font end of our schedule is pretty tough,” said Hudy. “We played Bellefonte, Clearfield, Susquehanna Township, and Penns Valley all in a row. We fought them hard, but we couldn’t beat them. But I’ve got to give our kids credit. They never folded.”

Tyrone and Huntingdon have played 89 times since 1922, and some of their best games have come in the playoffs or with the playoffs on the line. In 1940, when Tyrone went unbeaten and played Shenandoah in the East-West Championship, it was a win over Huntingdon late in the season that propelled the Orange and Black into the title game. Tyrone’s first District 6 championship came with a win over Huntingdon in 1987, just as Huntingdon’s came with a 6-0 win over the Eagles in the 3A title game a year earlier.

More recently, Tyrone needed a 24-yard field goal from Ethan Vipond with less than a minute remaining to deal Huntingdon a 24-21 defeat in the 2A quarterfinals in 2015.

Clearly, there’s a history there. But it will be irrelevant on Friday. Instead, the game for Tyrone will come down to three things:

With just one fourth-quarter touchdown last week against Valley, Tyrone could have made the season-finale a moot point. But scoring has come at a premium for the Golden Eagles, who have scored just one second-half touchdown since Week 4.

Huntingdon is averaging is averaging 26.6 points a game, and its offense is hot. Translated: the Golden Eagles will need to put points on the board.

They’ve been close, and there are some positive signs for them this week. For one, Denver Light will start once again at quarterback after an injury limited him to one side of the football last week outside of the first and last series of the game. Light has thrown for more than 1,000 yards and 11 touchdowns, and he’s 105 yards away from reaching 4,000 total yards for his career.

His presence will be a big factor for an offense that over the last two weeks has begun distributing the ball almost as effectively  it did in the first four games. Damon Gripp and Tommy Hicks, who each have over 300 receiving yards, have been much more involved in the flow of the offense, as has Cory Lehman, who has 299 receiving yards even after being shut out against the Rams.

Beyond that, running back Zac Albright enters the game needing 173 yards to reach 1,000 for his career.

So there’s plenty of skill and motivation, but at the end of the day that’s going to have to translate into points.

As he has gone, so had the ‘Cats’ offense. In a win over Philipsburg-Osceola two weeks ago he passed for 102 yards and a touchdown and ran for 59 more. He followed that up against Central with his best game of the season, completing 11 of 21 passes for 187 yards and three scores while running for 157 yards and two more touchdowns.

Andrew Hudy has more than 1,000 total yards this season, but Coach Hudy feels the real key to the turnaround has been inexperienced skill players growing into their positions.

“We had to replace a lot of skill guys at the start of the year,” he said. “A lot of the season has gone by and we’re seeing them get better. They’re veterans now, with eight or nine games under their belts.”

Wilson has been impressed with the ‘Cats’ running game, which has produced more than 1,200 yards, and with Ryan Kocik in particular. Kocik leads Huntingdon with 493 yards on 93 carries.

“Their running back runs hard. He’s really tough, and he keeps his legs moving,” said Wilson. “Hudy is a big kid and another mobile quarterback who is a run-pass threat. If we can keep him going east and west, we’ll be okay. It’s when he goes north-south that he becomes hard to stop.”

It all starts with the quarterback, and Tyrone’s performance against run-pass signal callers was dicey at best until stifling Tobias last week. While the threw for 189 yards, he had the two picks, never hit a big throw, and his impact on the running game was minimal.

“We’ve been eliminating the big plays and getting to the ball again,” said Wilson. “We’re almost back into the rhythm where we were early in the season. And we’re forcing turnovers, which is huge. We’ve got to take advantage of the opportunities our defense is giving us.”

For all of its troubles, Tyrone’s offense was holding onto the football before Weeks 8 and 9. Over the last two games the Eagles have turned the ball over five times, three of which came in the red zone.

Defensively, on the other hand, Tyrone has been as good as defensive coordinator Pat McNelis could hope, forcing 21 turnovers.

Hutningdon is just as solid, with 20 takeaways, 14 of which have come on interceptions.

For all of the improvements Light has made at quarterback in terms of decision-making – he’s taking fewer sacks, tucking and running quicker – he’s thrown two of Tyrone’s last three picks inside the 20.

If Tyrone is going to put points on the board, those INTs have to be TDs.

Panthers go to the ground to eliminate Eagles