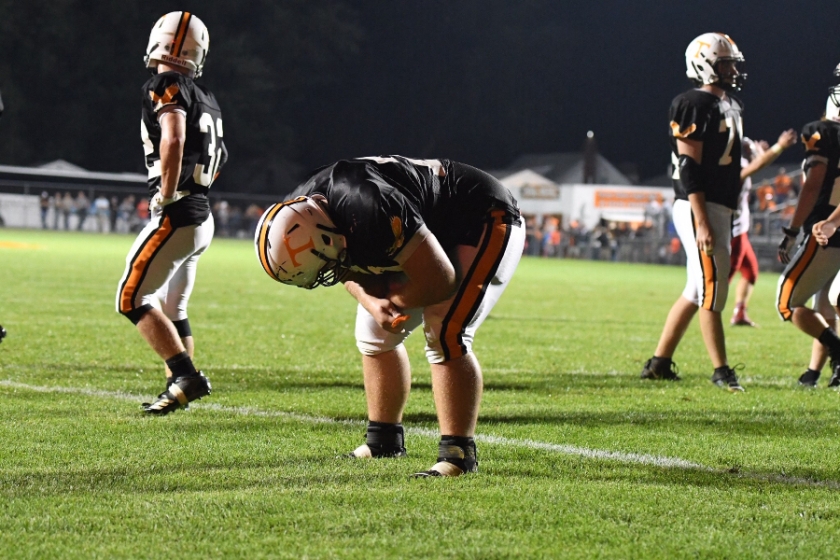 Let’s get this out of the way from the start: the last seven seconds of Tyrone’s 12-7 loss to Central last night at Gray-Veterans Memorial Field were not the finest moments for the crew officiating the teams’ Mountain League opener.

Agree or disagree with the calls that were made, it’s hard to argue that the time played out with all the chaos of merging onto 376 East after a Steelers home game.

For that reason, Tyrone coach John Franco was somewhat exasperated after watching his team lose for the second straight week on the opponent’s final offensive possession.

“It’s just really frustrating for us to battle back like that and then have controversy at the end. But that’s the game,” said Franco. “It’s our job to win the game so it doesn’t take a controversial call. We had a couple of opportunities to put that away, and we didn’t.”

The sequence that led to Franco’s frustration was this: trailing 7-6, Central took over at its own 34 with 6:10 left in the game. Led by senior quarterback Braden Kitt, the Dragons used 14 plays and a personal foul penalty to march as far as Tyrone’s 2 with 12 seconds to play.

After Central used its final timeout, Kitt sneaked off tackle to the right on third-and-goal but was stood up near the line of scrimmage. As the side judge came towards the center of the field with his arm extended to spot the ball, another official signaled touchdown.

Following a conference, the crew determined Kitt had not broken the plane of the end zone, placing the ball on the 1. However, rather than restart the clock, as would normally happen following a running play that ends in bounds, the officials held up play and allowed Central to come to the line of scrimmage with no time expiring.

That in turn forced Franco to call a timeout to reassemble his defense. When play resumed, Kitt again called his own number, and he was again stacked up at the line of scrimmage. Again the side judge signaled to spot the ball, and again a second official ruled Kitt in.

This time there would be no discussion, and with two seconds remaining, the Dragons had the game-winning touchdown.

“(After the touchdown) I said to (the official), ‘You had the ball spotted,’ and he said, ‘You’re right, I did,’” said Franco, recounting the Dragons’ touchdown. “And I said, ‘Then how can the other guy give him a touchdown?’ He said, ‘I don’t know. I did not have him in the end zone.’ I said, ‘So the game’s over.’”

It was, indeed, over, sending Tyrone to its second 0-2 start in three seasons.

But rather than focus solely on the last seven seconds, Franco said the issue was his team not putting Central away when it had chances – and the Eagles certainly had their chances.

None was bigger than the one it got following a Dragon turnover in the second quarter, when Zach Imler fumbled at the end of a 9-yard run. Brandon Homan scooped it up, giving Tyrone possession at the Central 35.

Tyrone withstood a 10-yard loss on a second down sack of Brandon Lucas and drove as far as Central’s 1 where it was faced with fourth-and-goal. The Eagles opted to go for the touchdown but jumped offsides on the play, moving the ball back to the six. Keegan Raabe came on to attempt a 23-yard field goal, but although he had plenty of distance the kick missed to the left.

Central fumbled on its next series, as well, after advancing as far as Tyrone 17, allowing Tyrone to run out the first-half clock.

“We weren’t playing at the highest efficiency,” said Central coach Dave Baker. “We fumbled and did some things that weren’t very good, but we were able to show a little grit and hang in there until the end.”

In many ways, the game looked like a slam dunk for Central from the get-go as Tyrone lost four starters in the first five minutes of play. Defensive back Levi Blazer was injured on the kickoff, and one play later two-way starter Damon Gripp went out with a sprained ankle and did not return.

Running back Tommy Hicks was knocked from the game when he was run into while punting to end Tyrone’s first possession. Trainers and EMTs placed an air cast on his leg before he was taken to the hospital.

That extended the drive, but on the next play lineman Kyle Silva went down and was gone for most of the first half.

Somehow, the Eagles regrouped and scored on the series, capping it with a 1-yard run by Lucas. Raabe’s extra-point gave Tyrone an improbable 7-6 lead that held up until the final two seconds.

“We were hurting tonight big time,” said Franco. “I was really proud of our kids. We lose Levi, we lose Damon, we lose Tommy Hicks, we lose Kyle Silva. I don’t know if in all my years I ever experienced something like that. Silva came back and gutted it out in the second half. That was gutsy play by him.”

Central had scored on on its first series, one it started at its own 45. On the first play Gripp stumbled in closing on Jeff Hoenstine, who had taken a short pass from Kitt. The play went for 30 yards to the Tyrone 25, and Gripp left the field and would not return.

Kitt later ran for 22 yards to the 4, later blasting in from the 1 to make it 6-0 after the try for two failed.

Kitt gave Tyrone’s defense fits, passing for 128 yards and running for another 62. He was sacked three times by Matt Clifton, but still managed to complete 13 of 16 passes while producing three runs of 17 yards or more.

“That was an excellent game for him,” said Baker. “He gives our team confidence.”

Tyrone limited the Dragons to just 91 yards on the ground, stopping five plays behind the line of scrimmage and forcing the Dragons to punt on their first three possessions of the second half. But Central’s defense was just as stout. After moving the ball on its first two series, Tyrone punted away each of its four second-half possessions, going three-and-out on its last two tries.

“What it comes down to is it’s still our fault,” said Franco. “We had opportunities to make plays in the second half and even the first half that we didn’t convert on.”

Tyrone will now try to get healthy as it searches for its first win next week on the road against Bishop Carroll.

GAME NOTES: Lucas led Tyrone with 31 rushing yards on 14 carries … the Eagles did not turn the ball over … Hoenstine had 8 receptions for 88 yards … Tyrone’s state championship team of 1999 was honored at halftime on the twenty-year anniversary of its title season.