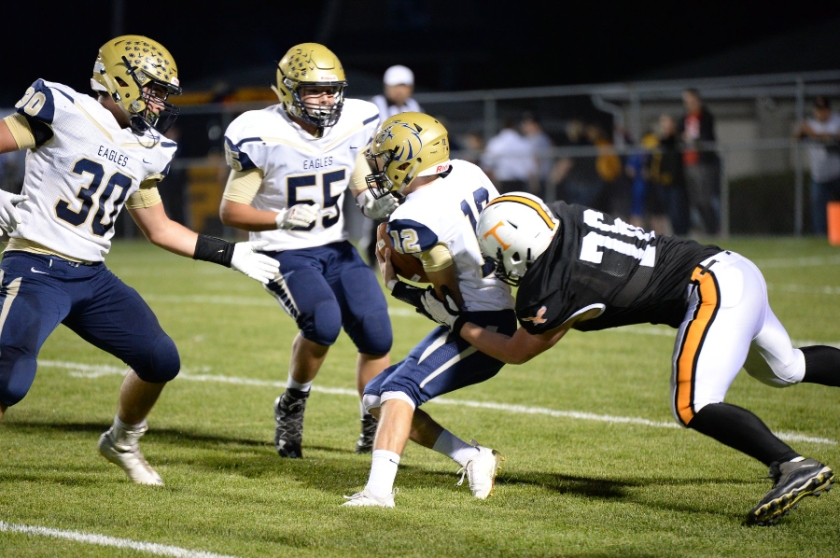 The Last two weeks have not been pleasant for the Tyrone Golden Eagles.

After last night’s 31-0 shutout at the hands of Bald Eagle Area at Gray-Veterans Memorial Field, Tyrone had been outscored 86-10 and thoroughly dominated. In two weeks the Golden Eagles had allowed 45 first downs while compiling only 13 themselves. They had surrendered 793 yards while amassing just 309.

Those are staggering numbers for any team, but none more so than Tyrone, which had moved the ball well before taking on a pair Centre County teams with just two losses between them.

The difference between the two games is the Golden Eagles had chances – plenty of them – last night in the first half against the 5-1 Bald Eagles, but they were never able to capitalize. And the problems were self-inflicted, something rare for a Tyrone team coached by John Franco, even in this season, with the Golden Eagles struggling at 2-4.

“We have averaged three penalties a game and less than one turnover a game. In a game like this, you’ve got to play your A-game to compete, and we still hung in there,” said Franco.

That the effort was there is undeniable. Late in the game, with BEA ahead 28-0 and on the doorstep of a fifth touchdown at the Tyrone 6, the Golden Eagles defense was up to the challenge, holding the Bald Eagles to a 25-yard field goal by Carter Stere.

Effort wasn’t the issue. The issue was making the most of the opportunities BEA afforded in the first 24 minutes. In those situations, Tyrone was, as Franco said its “own worst enemy.”

We’re learning a lot about ourselves now, and we’ll get better from this

Tyrone fell behind 7-0 three-and-a-half minutes into the game after turning the ball over on its first possession on a fumble by Brandon Gripp at the end of a 10-yard reception. Bald Eagle used six plays, including an 8-yard run by quarterback Jaden Jones, to take an early 7-0 lead.

From there, the Golden Eagles had three prime chances to put points on the board, but each time penalties and sacks played a role in keeping them out of the end zone.

Following Jones’ score, Tyrone advanced on the Bald Eagles for an 11-play drive that included what appeared to be a 32-yard scramble for a touchdown by quarterback Brandon Lucas. However, the play was negated when Tyrone was flagged for holding, leading to the first of five punts.

Bald Eagle handed the ball back to the Golden Eagles quickly, with Gripp picking off Jones on the Bald Eagles first play from scrimmage on the ensuing drive, giving Tyrone the ball at the 38. After a procedure penalty put the Golden Eagles behind the sticks, a snap in shotgun formation went over the head of Lucas, who covered it up for a 19-yard loss.

BEA fumbled on its next series, and Tyrone would drive as deep as the 14 when it took over before Lucas was sacked for a 14–yard loss on second-and-8. The drive ultimately stalled on downs.

Tyrone nearly escaped the half down 7-0 after Matthew Clifton ended a BEA drive that went as far as the 5 with a sack on fourth-and-four, but a 6-yard sack of Lucas after the following series reached the 24 forced a punt, and BEA made it 14-0 with a two-play, 20 second drive that ended when Jones hit Kaden Bittinger for a 10-yard touchdown with 23 seconds left.

It was the first full game back for Jones, who was injured in Week 3 in BEA’s only loss to Penns Valley. He looked comfortable from the start and finished with 126 yards and a touchdown on 14 carries while completing 11 of 15 passes for 103 yards and three more scores.

“He gives us a huge advantage,” said Bald Eagle coach Jesse Nagle. “This is the first time we’ve been healthy all year long. Jaden does some really nice things. We’ve got to clean up some things, but that’s because we haven’t been playing together.”

Jones threw for two more touchdowns in the second half while rushing for 94 yards. His first touchdown pass ended the Bald Eagles opening possession of the third quarter when he hit Matthew Reese on a quick flare. Reese did much of the work, making several defenders miss on a 16 yard touchdown reception to cap a 62-yard drive and make it 21-0.

BEA’s final touchdown came on a 87-yard, 13-play drive where Jones ran for 15 yards and passed for 26, including a 10-yard touchdown to Reese, who was in his first game back from injury since the season-opener.

“That kid is outstanding,” Franco said of Jones. “As long as he’s playing for them they’re formidable because you can’t defend him. We had guys who were assigned to him, and they would get to him and miss him. I tip my hat to him. You get out here and have everyone in position, and he still gets by you. He was the difference in the game.”

Bald Eagle totaled 376 yards of offense while limiting Tyrone to a season-low 96. Six of The Golden Eagles’ plays went for negative yards, including four sacks of Lucas.

Six different players had plays of 10 yards or more for BEA, which is getting healthy at just the right time as it looks to lock down a number 1 seed in the District 6 3A playoffs in pursuit of its second straight championship.

“At the beginning of the year we were very excited about it,” Nagle said of his team’s vast arsenal of skill players. “Then we lost one (player), and a couple more against Penns Valley. So we’re excited, but we’re not going to get too hopeful because it seems like every time we get excited something happens. But we have a lot of different options, and out offensive coordinator does a great job getting them the ball.”

Tyrone is now in uncharted territory under Franco, just looking to get its head above water with a challenging stretch ahead, one that begins with a road game against 5-1 Clearfield next Friday. The loss to BEA was the first shutout at home for Tyrone since 2000, and it dropped the Golden Eagles to 2-4 overall and 2-3 in the Mountain League.

It was the fourth straight game in which Tyrone allowed a 100-yard rusher, and the sixth in a row the Golden Eagles went without producing a 100-yard back of its own.

Still, Franco said the season is a learning process for Tyrone in his first season back in the borough since 2011.

“We’re learning a lot about ourselves now, and we’ll get better from this,” said Franco.