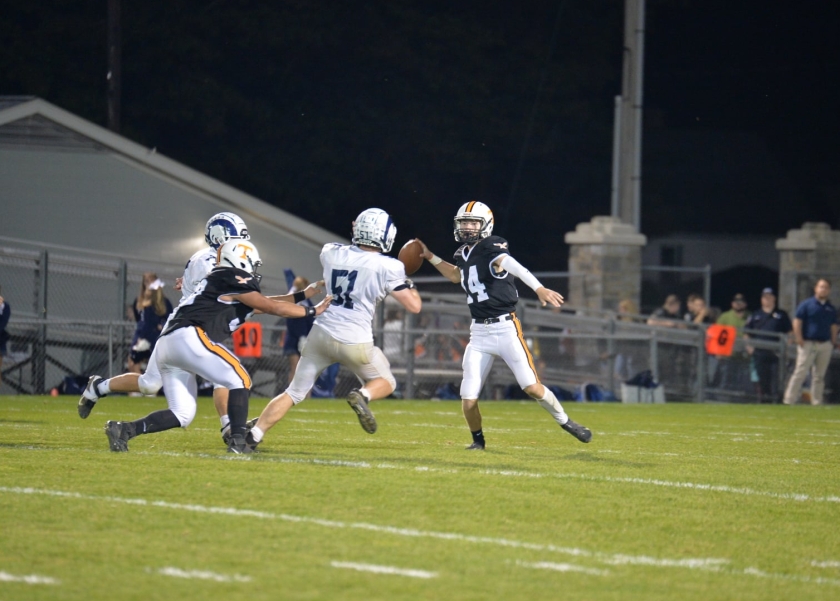 The plan all along for Tyrone’s game last night against Penns Valley was to rotate Keegan Gwinn and Ashton Walk at quarterback and then ride the player who got hot.

As well as Gwinn played through the first quarter-and-a-half, it was looking like the incumbent was going to see a lot of action.

But one errant throw in the second quarter – a pass that was very nearly a knockout blow for the Golden Eagles – put Walk on center stage, and the freshman played beyond his years.

In his first extended varsity action with the first string, Walk completed 12 of 22 passes for 180 yards and a pair of touchdowns, leading the Golden Eagles on a game-winning scoring drive in the fourth quarter.

Tyrone rallied from an 18-6 deficit in the second quarter to defeat the Rams 28-18 at Gray-Veterans Memorial Field, scoring twice within 30 seconds in the fourth quarter.

“Not bad for a ninth grader,” Tyrone coach John Franco said of Walk. “He’s a hard worker and smart kid.”

When Walk entered the game Tyrone trailed 18-6 with time winding down in the first half. He had played only one series before that, throwing incomplete on his only pass attempt. But the Golden Eagles were in need of a spark.

Until then, Gwinn had been as hot as ever, completing 9 straight passes at one point, including a 14-yarder for a touchdown to Corrie Beck to finish a 64-yard drive on Tyrone’s first possession and put the Eagles up 6-0.

The next time Gwinn saw action he continued to roll, completing three passes on a 54-yard drive that reached as far as the Rams’ 4. But on fourth-and-goal he was picked off by Tanner Ilgen, who ran the interception back 95 yards for a score that could have been a crusher. Even after Valley failed on the two-point conversion, it held a two-score lead.

Walk led the Eagles on an 81-yard drive to pull within 5 by halftime (18-13), but it was his performance with the game on the line that turned heads the most.

Tyrone’s defense stiffened in the second half, allowing only 98 yards (just five of which came on the ground) and winning the battle of field position. The Rams punted from their own 11 with under three minutes to play, and Brady Ronan ran it back 18 yards to the 26. After connecting with Ross Gampe for 13 yards and scrambling for four more, Walk calmly rolled right and hit Ronan in the front of the end zone with 1:53 to play to put Tyrone ahead 19-18. He then zipped a pass to Gampe over the middle for a two-point conversion that made it 21-18.

“I was nervous at first before I went in,” said Walk. “Then once I got in I got the feel for things and I felt good.”

Though its offense had stalled for much of the second half, Valley had made some big plays to that point, with both of its offensive touchdowns set up by long pass plays off the arm of Jackson Romig. His 53-yard bomb to Zach Braucht set up the Rams’ first score to tie the game on a 2-yard blast by Ilgen; later, he threw for 46 yards to Miles Brooks before hitting Braucht on a 17-yard fade to make it 12-6 in the second quarter.

With that in mind, the game wasn’t over yet for the Eagles. But on the kickoff following Walk’s pass to Ronan, John Meyer fumbled following a short return and Levi Walk recovered at the 26.

Three plays later, with the Eagles hoping to do little more than eat some clock and force Valley into using its final timeouts, Ronan bounced one outside and scored from 20 yards out to put the game away.

The win was everything Tyrone needed after struggling to find its way offensively throughout the first half of the season. Against the Rams, the Golden Eagles accumulated 377 yards in total offense and ran the football for 116 yards – no small feat for a team that just a week ago finished with 22 yards on 22 carries in a loss to Bald Eagle Area. Ronan ran for 89 yards on 17 carries.

“It felt pretty good,” Ronan said of the revitalized offense. “It was a big missing part in our game because our defense and special teams were excellent, but our offense was flat.”

Tyrone upped its record to 3-4 overall and 3-2 in the Mountain League with its second win on the field this season. A Week 5 game against Huntingdon ended in a 2-0 forfeit after COVID-related quarantines kept the Bearcats from fielding a team.

For the Rams, which fell to 3-4 overall and 3-3 in the Mountain League, it was a missed opportunity. But one key to Tyrone’s dominance in the second half, when it ran 35 offensive plays to Valley’s 19, was field position. The Golden Eagles drove inside of Valley’s 35 on five of its six second-half possession, and while that yielded no points until the fourth quarter, they used the punting of Zac LeGars to pin the Rams deep. Three of their possessions in the third and fourth quarters began at the 11-, 7-, and 13-yard lines, respectively.

However, it was just that gritty nature of the second half that had Franco so pleased with his team. After falling behind big, they stuck to the game plan and found a way, which was a major hurdle for a team that has found itself behind a lot this season with few answers for a comeback.

Tyrone’s other score came at the end of the first half following the Ilgen interception.

Trailing by two scores, the Eagles began their ensuing series at their own 19 with 2:05 until halftime. Walk completed a pair of passes and ran for 12 yards on two carries to get the ball near midfield. He then found Beck for 17 yards to the Rams’ 43 and Rhoades for 24 to the 19. On the next play, Walk lofted a perfectly placed fade to Gampe for a 19-yard touchdown. The first of two PAT kicks by Gwinn made it 18-13 at halftime and gave Tyrone some steam for the second half.

“We had to get some momentum,” said Franco. “It wasn’t like they were stopping our offense. I love how we hung in there until the end.”

Tyrone will look to build on its momentum next week, looking to win two-in-a-row for the first time this year when it travels to Philipsburg-Osceola. Penns Valley will host Everett.