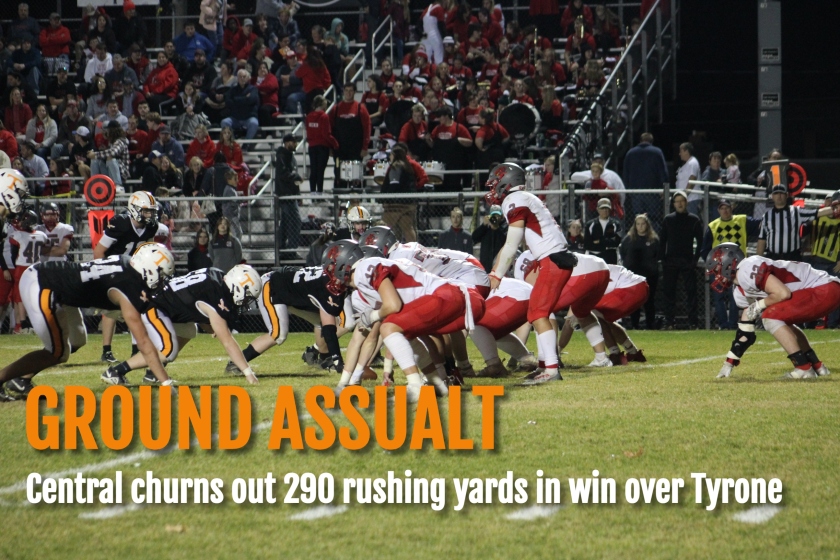 Tyrone coach John Franco knew the risk his team was taking when it committed to limiting Central’s star quarterback Jeff Hoenstine last night in the District 6 3A semifinals. Contain the record-setting passer and you risk opening up other aspects of the Dragons’ offense that may have flown uunder the radar during the regular season.

But what choice did the Eagles have? Hoenstine had spent three seasons dissecting defenses at a rate unheard of in Central Pennsylvania, passing for more than 9,000 yards and 135 touchdowns. Any logical game plan would have to start with keeping him under wraps, and in fact Tyrone did that as well as any team this season. Hoenstine completed just 13 of 20 passes for a season-low 137 yards.

That put the fortunes of the Dragons resting on a running game that was averaging 117 yards per game and it delivered in a big way. Behind the combination of Hunter Smith and Kade Rhule, Central ran for 290 yards and three touchdowns to overpower the Golden Eagles and win 35-14 at Gray-Veterans Memorial Field.

The No. 3 Dragons will now face No. 1 Penn Cambria in the 3A title game next week seeking their third consecutive crown in a rematch of the 2021 championship. The Panthers defeated Central earlier this season 42-28.

Smith bruised his way to 124 yards on 12 carries while Rhule slashed and sprinted for 119 yards on 15 tries.

Hoenstine got into the act, as well, gaining 47 on 11 totes as the Dragons gained more yards on the ground against Tyrone than any team this season by a long shot. The high before last night was the 202 Clearfield gained in Week 7.

“We could run the ball, and we stopped them for the most part,” said Central coach Dave Baker. “They had some good plays, but they’re going to because they’re a good team. But we stopped them a couple times.”

Central’s running attack kept Tyrone off balance and prevented the Eagles from ever really ganging up on any one part of the Dragons’ explosive offense. They finished with 12 running plays of more than 10 yards, complementing a passing game that produced five plays of 15 yards or more.

But in a game of big plays, perhaps the most important was a first-half completion to move the sticks that completely deflated a home crowd that was beginning to gain some hope and momentum as the second quarter wound to a close.

After falling behind 21-0, Tyrone had just pieced together its best sustained push, scoring a pair of unanswered touchdowns to pull within a single score with 3:17 remaining in the first half. The Eagles’ first score was set up by a 43-yard kickoff return by Dravyn Crowell that started Tyrone’s offense at the Central 17. Following a sack of Ashton Walk to set up fourth-and-16 from the 23, Walk tossed this one to Ross Gampe to get Tyrone on the board.

Gampe would catch 5 passes for 71 yards, but it was that 23-yard reception that ignited a brief Tyrone rally. On the Dragons’ next play from scrimmage, Hoenstine, who had thrown only 5 career interceptions in 885 attempts, was picked off by Brady Ronan, putting the Eagles in business at Central’s 30.

Things couldn’t have been working out better for the Eagles, who had to find some way, any way, to keep pace with the Dragons’ nearly unstoppable offensive assault.

In response, Central didn’t immediately turn to Hoenstine’s arm, instead opting to take what was given and hand the ball to the 6-foot-2, 210-pound Smith, who chugged for 25 yards to Tyrone’s 42 on the first play following the kick.

The Dragons would push it to Tyrone’s 18 as the clock wound under 30 seconds in the first half. Facing fourth-and-7, with Tyrone threatening to go into the locker room with a renewed sense of life and a raucous home crowd ready to burst, Hoenstine delivered a strike to Shalen Yingling for 17 yards to Tyrone’s 1.

It was a deflating blow, and the air in the home grandstands only continued to dissipate after Hoenstine completed this 1-yard toss to Smith with 7.1 seconds left until halftime.

That was a confident throw to a spot made by a quarterback whose been there and done that when it comes to tight games. When things got hot, Hoenstine was at his best, and those two plays from a quarterback who wasn’t having a great first half were killers for the Eagles.

“That was huge because then they got the ball back, too,” said Tyrone coach John Franco. “And they scored there, and that pretty much put the game away. It was a perfect pass, and we had him covered well. He put the ball right where it had to be. But the guy still had to make the play, and he made a great catch. But that’s what they’ve done for the last couple years. They’ve made plays.”

When Central got the second half kick, it went 52 yards in seven plays to regain its three-touchdown lead, and once again Yingling played a big part, picking up 34 yards on a pass from Hoenstine on third-and-6 to move the ball to Tyrone’s 20. Four running plays later, Smith went in from the 2 to make it 35-14 with 8:09 left in the third quarter.

“They played a great game,” said Franco. “They dominated us on both sides of the line of scrimmage, and their skill kids outplayed us. And their coaches outplayed us. They had them really well prepared.”

Tyrone had its shots to get on the board in the second half, forcing two more turnovers and getting inside the 25 twice, but each time Central had an answer. Crowell himself nearly cut into the lead with this 60-yard interception return that nearly went for a touchdown until it was called back for an illegal block in the back.

Braden Ewing, who went without a tackle for loss for the first time this season, tipped Hoenstine’s pass on the play, and Tyrone’s sideline unanimously agreed the block in question was legal, but nonetheless it set up the Eagles at the 43 and they could make it no further than the 24 before turning the ball over on downs.

In the fourth, Tyrone advanced as far as Central’s 7 before an illegal substitution penalty pushed the Eagles back to the 12. Walk, who completed 17 of 39 passes for 198 yards, ultimately threw incomplete on four straight passes to end the drive.

The series emphasized a problem the Eagles faced most of the night. The issue wasn’t moving the football as much as it was punching it in, and against a team like Central that can score in droves, empty possessions, no matter how long they last, will be costly.

Tyrone’s first series was a prime example. The Eagles marched 55 yards on 14 plays to the 14, even converting on fourth-and-18 with this 20-yard strike from Walk to Gampe.

But after the drive stalled, Rocky Romani missed a 31-yard field goal attempt, and the gates opened quickly for the Dragons, starting on their first play from scrimmage – a counter-trap to Smith, who rambled 45 yards to Tyrone’s 35.

“That was where we started to turn the tide,” Baker said of the missed kick. “That first drive they looked pretty good.”

Hoenstine then carried for 12 and 17 before scoring from the 4 to make it 7-0 after Smith’s kick.

Tyrone was on shaky ground, and things got more dicey after Eli Muthler picked off Walk and returned it to the 21.

Three running plays later, Rhule chugged in from the 12.

It was a tough run, and it was emblematic of the way Central was prepared to play against a defense dialed in on the pass. Rhule had six runs of 10 yards or more, and his explosiveness was more than Tyrone could handle.

The loss closed the books on an 8-3 season for Tyrone, the most wins for a Golden Eagles team since 2015. It was Tyrone’s third straight trip as far as the District semifinals.

“We’re there and we’ve got to get over that hump,” said Franco. “This senior class really got it turned around for us. It got the culture back to where it needs to be, and that’s going to benefit the junior and senior class for next year. We had some excellent kids who played their tails off, and things the right way. Even being 8-2. I think some other teams might have been thrilled. But our guys were not satisfied.”

Central improved to 9-2. Their finals game against Penn Cambria will be a rematch of a Laurel Highlands game played in Week 3.