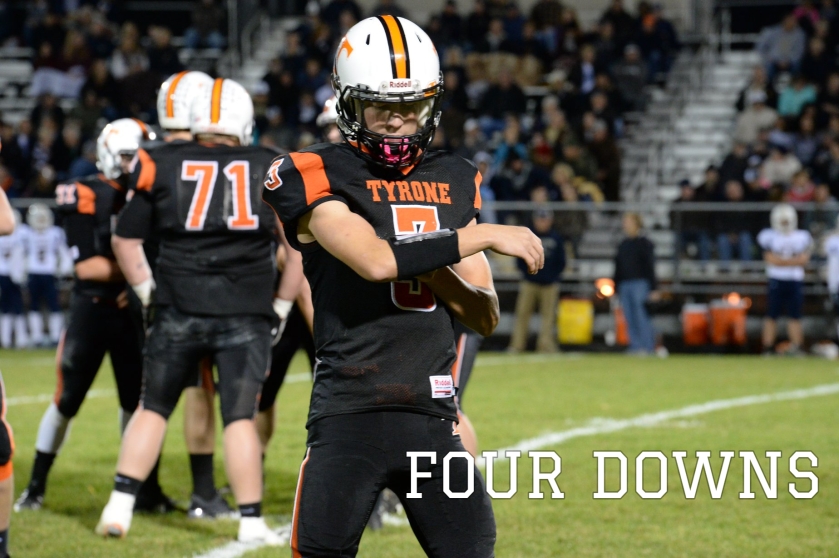 The Tyrone Golden Eagles are behind the 8-ball following Friday’s 28-13 loss to Hollidaysburg. With a Mountain League game against Penns Valley on the horizon, Tyrone is in danger of missing the playoffs without at least a 1-1 split in its last two games.

Here are the takeaways from the Homecoming loss to the Golden Tigers.

For several weeks Tyrone coach Jason Wilson has said the way for his team to find the offensive flow it enjoyed during its four-game winning streak to start the season was to reestablish the running game.

While 118 yards on the ground may not seem like much – especially in Tyrone, where rushing the ball has been the name of the game for winning teams even during the best passing seasons in school history – it was a definite step in the right direction.

It was the first time the Golden Eagles had more than 100 yards rushing since facing Bellefonte in Week 5, and not coincidentally it was the first time since that game that the Eagles were competitive into the second half and had a chance, though slim, in the fourth quarter.

Senior Zac Albright carried 18 times for 130 yards, his first 100-yard game since Week 5, and put himself back into contention to become Tyrone’s first 1,000-yard rusher since Gary Weaver in 2015. He broke four runs of 10 yards or more, often getting to the outside of the Hollidaysburg defense and winning races to the edge.

“They bounced a couple things on us, and (Albright) is a really good running back,” said Hollidaysburg coach Homer DeLattre. “He was able to bounce and get out in space. Those were designed inside and they bounced out, and we didn’t do a good job with our angles.”

Albright now has 761 yards this season, but more importantly Tyrone may have rejuvenated a running game that will be essential to scoring touchdowns over the final two weeks of the regular season.

If Tyrone took a step ahead with its running game, it didn’t make those same strides in preventing minus-plays. Hollidaysburg ended six plays in the Golden Eagles’ backfield, including five sacks of Denver Light.

It continued a trend that surfaced against Bellefonte, when Tyrone surrendered six tackles for loss, but truly became an issue a week later against Bald Eagle Area, when the Golden Eagles allowed 13.

In their four-game slide, they been stopped behind the line of scrimmage 32 times, and many of them have been huge losses, like the 22-yard loss on a snap over Light’s head against Clearfield, and the 18 yards lost in the same scenario against the Golden Tigers.

Tyrone’s offense has shown the ability to make big plays within its natural rhythm, but to make them against teams playing to the sticks on third down is a tall task for any team.

The Golden Eagles secondary was a strength even through Week 5, but when it began facing mobile quarterbacks who could extend plays with their running ability things began to turn. BEA’s Jaden Jones, after throwing a pick on his first pass, diced Tyrone through the air, as did Clearfield’s Isaac Rumery.

So with Penns Valley’s Aaron Tobias on deck, it was a positive sign to see the secondary making plays again against Hollidaysburg. While Brady Walters passed for 126 yards, he was picked off twice by Zac Albright, and outside of a long touchdown to Austin Weakland in the first quarter the deep threats were taken away by the Golden Eagles’ defensive backfield.

Tyrone totaled a season-high 5 takeaways against the Tigers, three of which came in the first half to keep the game close. They’ve now forced 17 turnovers, 10 of which have come on interceptions.

“We got a couple turnovers, and that was big to keep us in the game the first half,” said Wilson.

Tyrone and Penns Valley first played in 1993, with Tyrone winning 22-21. They wouldn’t play again for six years, when the Eagles faced the Rams in the District 6 2A semifinals at Gray-Veterans Memorial Field, a game Tyrone won 42-6.

Since then, they’ve never lost to the Rams, building a 17-game winning streak.

The series has rarely been close – 2007 and 2008 were the best game in the series, with Tyrone winning by a single touchdown each time – but the 5-3 Rams have never been as good when they’ve met as they are now, after winning three in a row and scoring more than 37 points per game.

The Eagles have never played exceptionally well in Spring Mills, and that’s something Wilson was contemplating in the wake of the Eagles’ loss on Friday, knowing that a win could solidify the program’s twenty-fourth straight trip to the postseason.

“I think we say this every two years, but we never play good down there,” said Wilson. “For years, I feel like we go down there and it’s a tight game. I haven’t seen them much, so I don’t know what all they have, but being 4-4 now, it’s going to be a big game. It’s a game we really need to put ourselves in a better position, or maybe even seal our position. It’s definitely a game we need to get.”