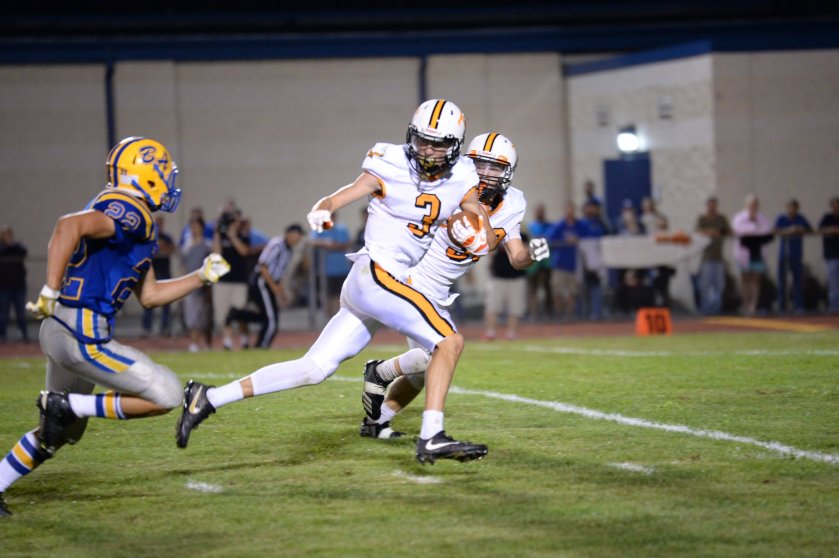 Coach John Franco is an analyzer. It’s one of his biggest strengths.

It’s also the source of some serious self examination, and for the legendary coach making his return to Tyrone, it didn’t take 10 minutes for that process to begin following the Eagles’ 35-32 loss in double overtime to Bellwood-Antis last night at Memorial Stadium.

“I put this on me. I think I put too much in on both sides of the ball,” Franco said just minutes after a determined Zach Mallon carried defenders on his back into the end zone for a 7-yard touchdown that gave B-A its first win over Tyrone since 2017. “We need to simplify more. We tried to get in what we thought would be enough to win this game, and I think I gave them too much.”

Whether or not that is true defensively will be up to Franco and his staff to determine over the next week. The 35 points was the most Tyrone had allowed to B-A since surrendering 31 in 2009, but offensively it would be hard to think the Eagles had bitten off more than they could chew.

In fact, Tyrone moved the ball more or less at will against the Devils’ massive defensive line and came through with play after play to move the chains and finish drives.

We need to simplify more. We tried to get in what we thought would be enough to win this game, and I think I gave them too much.

Tyrone ran 61 offensive plays to B-A’s 36. The Eagles outgained the Devils 161-114 on the ground and 360-259 overall. None of those numbers would indicate a team overloaded with information on offense, but they also don’t take into account the big plays that shifted the complexion of the game.

“We always talk about overcoming adversity. There’s going to be ups and downs in a game, and you can’t dwell on the downs. You have to forget about it and win that next play, and that starts to move momentum your way. There were so many valleys and hills in that game. It was just great to come out on top in the end.”

In the end, Tyrone simply failed to take advantage of a golden opportunity in overtime.

Tied 29-29, the Devils had the ball first in the extra frame and drove as far as the two. On fourth down, Lovrich opted to go for the touchdown and not a field goal attempt from lineman Evan Pellegrine, who had been perfect on extra-point placements. Nick Plank was stacked up at the line of scrimmage, and Tyrone took over at the 10, needing only a field goal to win. But on first down Hicks was dropped for a 3-yard loss, a mistake compounded two plays later when the Eagles were flagged for illegal procedure.

That set up a 30-yard field goal attempt from Keegan Raabe, whose knuckle ball kick went under the uprights.

Tyrone got the next crack at it, but could only get as far as the 4, and this time Raabe’s 20-yard attempt was true, giving the Eagles a 32-29 lead.

A procedure penalty backed the Devils to their 15 when they got the ball back, but a pass interference call later put the ball at the 7, setting up Mallon’s game-winning dash, which was reminiscent Shawn Wolfe’s overtime run to victory in Bellwood two years earlier.

“I was looking for one tiny hole, and we just hit it,” said Mallon. “Great blocking, and we got it in.”

B-A took an early lead on a 2-yard run by Mallon in the first quarter, capping a 58-yard drive that came on the heels of a Tyrone advance that had penetrated as far as the Devils 32.

Tyrone answered with a 17-play, 75-yard drive for a game-tying score that ended with five straight running plays, the last a 1-yard run by Corrie Beck. Soon after, Noah Zimmerman broke loose on a 54-yard touchdown run. Although the snap from center was low on the PAT, holder Brandon Homan was able to pick it up and run for the two-pointer and a 15-7 lead.

At that point the game had reached a critical phase. B-A soon turned the ball over when Trevor Miller had a pass tipped and intercepted by Brandon Lucas, giving the Eagles the ball at B-A’s 31.

Five plays later Tyrone was at the 10 and looking for a two-touchdown lead that could have taken the life out of the Devils, but a halfback pass from Hicks was picked off by Ty Noonan, and the game of one-upsmanship that reached a crescendo in the fourth quarter had begun.

“We lost that touchdown. Tommy was trying to make a play there, and he got hit as he threw,” said Franco. “But this year is going to be a lot of trying to change the culture of our program and getting the kids used to our system. It’s going to take some growing pains as you saw tonight.”

Tyrone’s defense had been fairly stiff to that point, limiting B-A to zero net yards outside of its first series.

That began to change in the third quarter, as the Devils saddled up and rode their husky offensive line to a pair of touchdowns. The first came from an old-school smash-mouth drive consisting of five straight running plays to move from their own 41 to Tyrone’s 22. Then on third-and-1 Miller hit Troy Walker on a 22-yard pass that, coupled with Mallon’s 2-point PAT, tied the game at 15-15.

The Eagles came back with a 12-play drive to B-A’s 25 that was thwarted when Plank stepped in front of a Lucas pass and returned it to the 32, setting up a 68-yard drive that ended with a 19-yard run by Mallon for a 22-15 Blue Devil lead early in the fourth.

Damon Gripp tied the game for the third time with a 47-yard catch and run on a pass from Lucas, who completed 14 of 25 passes for 167 yards.

Mallon broke the tie just seconds later when he returned the ensuing kick 87 yards for a score.

“We’ve just got to win the next play, no matter what,” said Mallon. “They made a lot of great plays, and we made one more than they did.”

Tyrone got the ball back at its own 27 with 5:27 to play and again found a way to tie the game. The Eagles converted once on third-and-short on a run by Hicks, and once on fourth-and-6 when Hicks caught a 10-yard slant from Lucas. Hicks would eventually score from the 1 with 39.6 seconds to play, setting up overtime.

Tyrone will open up its Mountain League season next Friday at home against Central, a winner last night over Northern Bedford.