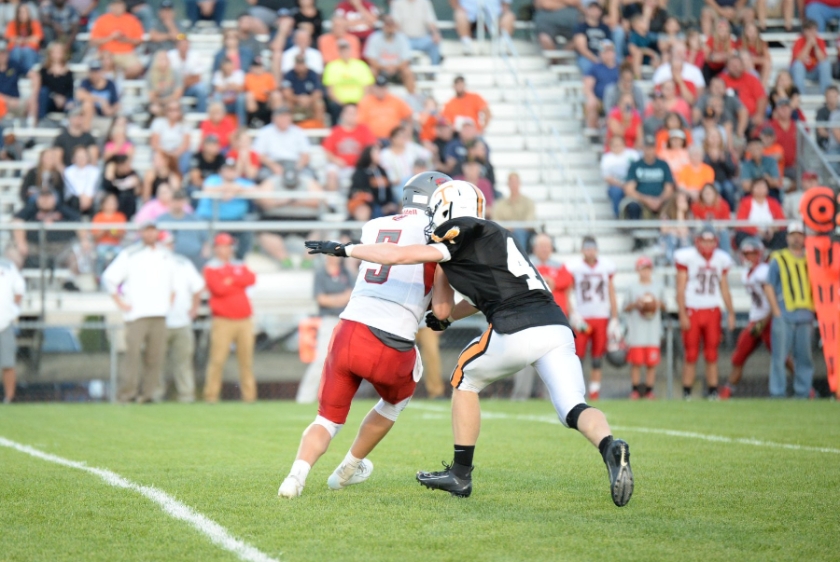 SERIES HISTORY: Tyrone and Bellefonte matched up for the first time in 1922, with Bellefonte winning 8-7, but until recently it was a series dominated by the Orange and Black.

From 1993 through 2015, the Golden Eagles topped the Raiders 19 straight times, and few of the contests were close, with Tyrone scoring 35 or more points on 11 occasions. That all changed in 2016, when a second-half fumble recovery returned for a touchdown by Garrett Kutches served as the key play in a 14-13 Bellefonte victory that set the Raiders on what has grown into a 3-game winning streak against Tyrone, their longest such string since winning four in a row from 1989 through 1992.

The most bizarre period in the series came from 1983 through 1987, when the teams tied three times and had two other games decided by a touchdown or less.

Tyrone leads the overall series with 43 wins and 22 losses. Nine games have ended in ties.

LAST MEETING: Touchdowns from Tommy Hicks and Zac Albright had Tyrone up 14-7 at halftime, but the Eagles had no solution for a rejuvenated Bellefonte running attack in the second half.

The Red Raiders stuck almost exclusively to the ground in the third and fourth quarters, producing 222 rushing yards in a 31-14 victory at Alumni Stadium in Wingate on Friday, September 21, 2018.

Running back CJ Funk did most of the damage, running for 133 of his 183 yards in the second half, including a 61-yard touchdown on the first play from scrimmage in the third quarter to tie it.

Kyle Myers gave the Raiders the lead with a fourth-quarter touchdown pass and added some cushion with a 3-yard run for a score. Bellefonte’s defense, meanwhile, limited Tyrone to just 17 rushing yards over the third and fourth quarters.