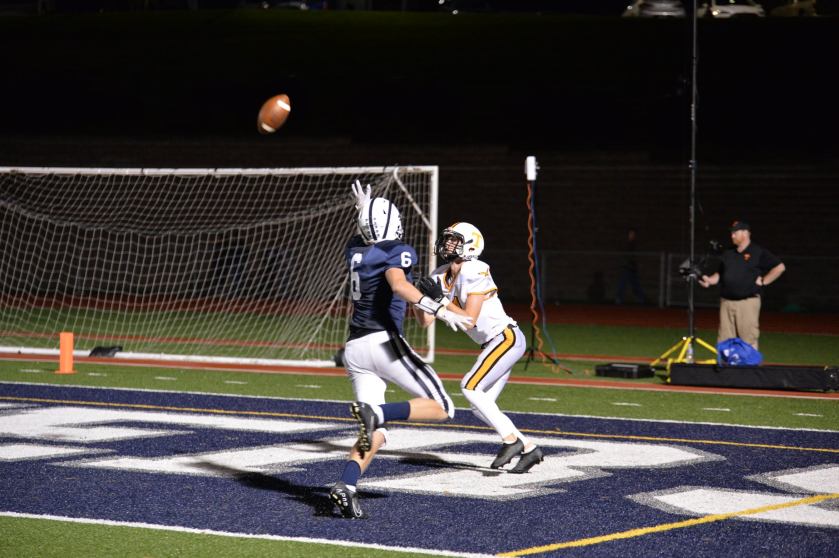 The strategy Hollidaysburg chooses to employ Friday when Tyrone travels to Golden Tiger Stadium for a non-conference game will tell you everything you need to know about the Golden Eagles recent turnaround.

While Tyrone has won two in a row, evening its record at 4-4, playing exceptionally well in three straight, the book is still out on the Golden Eagles’ ability to line up and stop a running game headed right at them.

Hollidaysburg, on the other hand, is a team that generally likes to pass first, using the arm of Jake McGinnis as its top option, which then in turn allows the Golden Tigers to run.

Tyrone has played teams like this already, and in most cases those teams have chosen to abandon their multi-dimensional offenses in favor of simply running the ball down Tyrone’s throats, and in few of those occasions has that been good for the Golden Eagles.

Clearfield, behind quarterback Oliver Billotte, could pass as well as anyone Tyrone has faced, but after the Eagles cut into a lead to make it 14-6 at halftime, the Bisons went strictly to the ground in the second half of a 42-12 victory. Bald Eagle Area mirrored that tactic, and when the game was close late the Bald Eagles turned things over to Garrett Burns, who torched Tyrone in the fourth quarter of a 15-9 win.

While those are only two examples, the point is Tyrone has struggled stopping the run this season. In seven games played on the field, the Eagles have allowed 1,229 yards for an average of 175 yards per game, and when opponents have needed tough yards, they have gone to the ground with little resistance.

While much of Hollidaysburg’s offense is centered on McGinnis, who has completed 94 of 177 passes for 1,112 yards and 10 touchdowns, they are still a team that has run the football with some success. In seven games the 3-4 Tigers have run for 893 yards, led by Xander Bainey’s 375 yards on 74 carries. Two other rushers have more than 200, including McGinnis, who has run for 269 yards on 60 carries.

“We match up really well against teams that try to throw the ball or try to play that wide open game against us,” said Tyrone coach John Franco. “They feel they’re so much bigger than us on the line that I think they’re going to try to run it against us. Being a 5A school and having bigger players, that’s the first thing you look at doing. At the same time the strength of their team has been throwing the ball around.  I really think they’re going to come around and try to use their size advantage.”

If Tyrone is to make it three in a row and assure themselves a .500 regular season, that’s something they’re going to have to deal with, and doing so got much more difficult on Thursday when the Eagles learned one of their starters on the offensive and defensive lines was out for the game because a family member tested positive for COVID.

The player himself had not tested positive and because of close contact a negative test at this stage would not get the player on the field, and that had Franco irked to say the least heading into Friday’s game.

“We had the best week of practice all year with our offensive line. I mean, they are really coming on,” said Franco. “And now we have our best lineman out, and there’s not a thing wrong with him. There’s not anything involved but politics. They’re taking our kids off the field for their mandates. This is so ridiculous. It’s every day, not just every week. It’s every day, we are on pins and needles, trying figure out who we have. We have thirty-five kids. We’ve lost 11 at one point. You can’t practice, let alone play.”

The loss of a top lineman will affect the Eagles on the other side of the ball, as well, where the Eagles have failed to produce much of a ground game with any consistency. They have run for only 418 yards and produced only one 100-yard rusher, that in Week 3 when Brady Ronan topped the mark against Bellefonte.

At issue is a group of young linemen who came into the season with almost no varsity playing experience, a group made all the thinner after Thursday’s news. The line has made strides to be certain, and when it comes to pass blocking it has shown well of late. Last week against Philipsburg-Osceola the unit allowed only one sack of Ashton Walk, giving the freshman the time he needed to complete 11 of 19 passes for 305 yards.

Walk will make just his second start this week, and Franco anticipates the Golden Tigers bringing the house against him in an effort to shake the freshman, who has now completed 36 of 68 passes for 636 yards and 7 touchdowns. But if Walk has shown anything it’s a clam demeanor under pressure.

“This kid handles pressure pretty well,” said Franco. “We have enough variety in our offense that we can try to take advantage of that, too.”

Walk has spread the ball around to a host of receivers, and last week he found a strong liking for Corrie Beck out of the backfield. Beck had 134 yards receiving against P-O and is second on the team with 17 grabs for 281 yards. Cortlynd Rhoades leads the team with 18 catches for 320 yards and 3 touchdowns. In all, five players have more than 10 receptions, and four have more than 100 yards.

While the Golden Tigers’ secondary hasn’t disrupted offenses with interceptions, their defense has pressured the quarterback. Hollidaysburg has recorded 10 sacks, led by Sebastian Ross’s 4. In all, the unit has 51 tackles for loss.

The Tigers have allowed some big passing games, including 252 in a loss to State College and 213 in a loss to Erie McDowell. But they’ve kept most teams in check, in part because of their hard-driving pass rush.

Tyrone was able to distance itself a bit from Westmont Hilltop in the District 6 3A standings with its win last week. The Eagles continue to hold the third spot, 16 points ahead of the Hilltoppers.