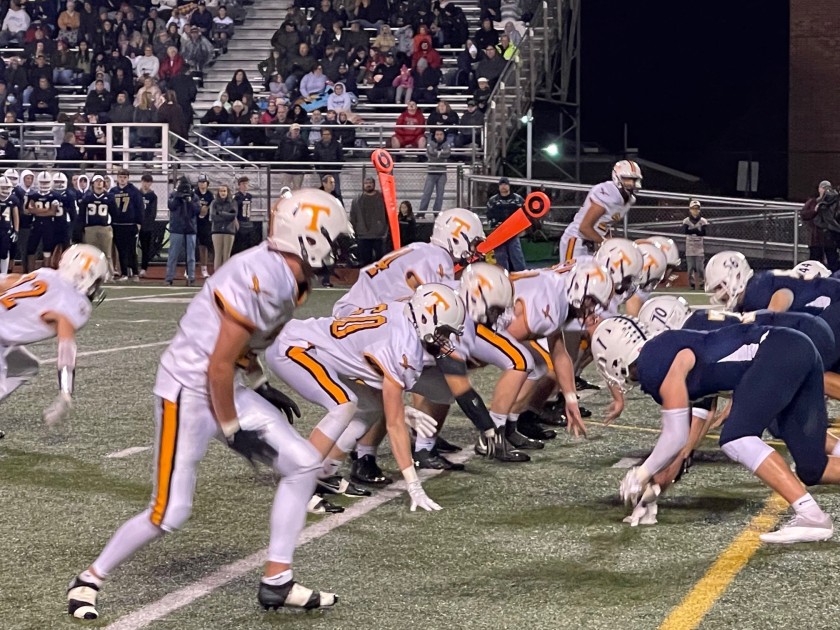 Tyrone’s first offensive series against Hollidaysburg last night at Golden Tigers Stadium was about as close to perfection as the Eagles could have hoped for.

The march lasted 14 plays and went 80 yards, with Tyrone converting twice one third downs and sprinkling in just enough running plays to open up the pass. In his second varsity start, freshman Ashton Walk went 7-for-10, including a 9-yard scoring strike to Cortlynd Rhoades to cap a five-minute advance and put the Golden Eagles ahead 6-0.

But the problem for Tyrone was it was going to take multiple perfect drives to keep pace with the faster and more athletic Tigers. The Eagles would have had to replicate that same precision each time it got the football, eating up both yards and clock in similar fashion in hopes of keeping Hollidaysburg’s abundantly talented offense off the field.

It was an uphill battle the Eagles weren’t equipped to fight, and when their precision faltered in the second quarter the Tigers were more than capable of taking advantage, again and again.

Hollidaysburg scored 28 unanswered points over the final 11 minutes of the first half, capitalizing on Tyrone errors on special teams to build a big lead. The Tigers went on to win 44-21, in the process evening their record at 4-4.

“They dominated us at the line of scrimmage on both sides of the ball, and that’s the key,” said Tyrone coach John Franco, whose team saw its modest two-game winning streak snapped. “We had trouble running the ball all night. You can only throw every play so much.”

Tyrone’s opening salvo had the Eagles ahead into the second quarter, but even then it was apparent the Tigers had the goods to open up on the Eagles in a variety of ways. If it was going to happen on long drives like Tyrone’s, that could be done. The Tigers’ first touchdown came on 7-play series that went 91 yards. Quarterback Jake McGinnis had two big completions on the drive, first hitting Xander Bainey on a middle screen that went 22 yards before connecting with Justin Wolfe on a 37-yard pass that got the ball to the 9. Two straight runs by Bainey got the Tigers on the board, and the first of 6 PAT kicks from Ben Sosnowski put them ahead 7-6.

A back-and-forth game of long scoring drives was something Tyrone could have handled had it been able to play mistake-free and avoid surrendering too many big plays. That didn’t happen.

After a 7-play drive stalled at its own 47, Tyrone punted. Wolfe fielded the kick at his own 18 and broke containment down the left sideline for a 63-yard return that set up Hollidaysburg at the 19. On the next play quarterback Jake McGinnis tucked the ball off-tackle on a keeper for the Tigers’ second touchdown to make it 14-6 with 6:50 left in the half.

Hollidaysburg extended the lead after holding Tyrone to three-and-out, needing only two plays to hit pay-dirt once more. McGinnis hit Wolfe for 15 yards from his own 44 to get into Golden Eagle territory, and one play later Xander Bainey broke free up the middle on a 38-yard run to boost the lead to 21-6.

The Tigers’ next series stalled at their own 43 to force a punt, but Brady Ronan had the ball slip through his fingers and it was recovered by Caden Delattre at the 29. From there, Hollidaysburg needed only three plays to score on a 7-yard run by McGinnis to go ahead 28-6 at halftime.

“We work on special teams a lot,” said Hollidaysburg coach Homer Delattre. “We take a lot of pride in our special teams. We’ve been working hard on punt returns.”

Wolfe would burn Tyrone once more in the second half on a punt that came at the end of the Eagles’ first possession. On that one, the senior again got outside and down the sideline, outracing the coverage for a 64-yard touchdown jacked the Tigers’ lead to 35-6.

“Our special teams, which have been great all year, really kind of let us down,” said Franco. “We just couldn’t catch that kid. He was outstanding. They did a lot of nice things with their punt return. We haven’t had a punt return longer than 9 yards all year. They just performed really well on special teams.”

The Tigers’ punting wasn’t bad either. Sosnowski, who had five of his seven kickoffs go for touchbacks, also averaged 42.6 yards in six punts, one of which led to Hollidaysburg’s next score. Sosnowski boomed a 63-yarder that rolled to Tyrone’s 4, and two plays later Walk was sacked by Avery Sloan in the end zone for a safety.

The Golden Eagles regained a bit of their rhythm in the fourth quarter, mounting a pair of scoring drives behind the passing of Walk, who completed 26 of 42 passes for 273 yards. He found Kolten Miller alone behind the defense for a 58-yard score that made it 37-14 after hitting Ross Gampe for the 2-point conversion and then threw to Josh Patterson for a 4-yard strike to end an 8-play, 80-yard series.

“That was a lot of good work for Ashton,” said Franco. “He’s going to get better every game. He is just, I think, a special talent. I’m real excited for his development.”

Sandwiched between those scoring tosses was the work of another special quarterback. McGinnis broke loose off-tackle on a keeper for a 68-yard touchdown run, giving him three rushing scores on the night. He finished with 97 yards on 7 carries and completed 8 of 16 passes for 115 yards.

“I think mixing it up, run-pass, is what’s really beneficial,” said DeLattre. “Those corners and outside linebackers tried to really get aggressive, and then we were able to hit some of those quick passes in the seam. Overall, they compliment each other pretty well.”

In all, the Tigers racked up 286 yards on the ground and 401 yards of total offense.

The Golden Eagles conclude the regular season next week at home against St. Mary’s, and while the blowout loss to the Tigers wasn’t something they were anticipating, Franco is hoping his team can continue its upward trend throughout the month of October. One issue in question will be their physical status after several starters left the game against Hollidaysburg with injuries.

“We’ve had a good month, all in all,” said Franco. “We’ve really been coming along. I thought we could have played the whole game like we played the first quarter. We executed rally well.

“We got beat up pretty good. Right now, we’ve got five kids who are limping and one with a potential concussion. This close to the playoffs, that’s a concern.”

Panthers go to the ground to eliminate Eagles